What is DNA polymerase?

DNA Polymerase is the molecule responsible for making a copy of every cell’s genome. You may hear it referred to as a protein, an enzyme, or a molecule; all of these are correct. In order for a cell to divide effectively, a copy needs to be made of all of the DNA in the cell so that each daughter cell has a copy of the genetic material needed to carry out its specific function. This is how genetic information is passed on from generation to generation. Not only does each daughter cell need its own copy of the parent DNA, but this copy also needs to be extremely accurate in order for the cell to survive and function properly.

DNA polymerase is an enzyme that is extremely accurate, but a mistake is made about once in every billion base pairs. To correct this, the polymerase has a proofreading function that will be discussed in greater detail later. Polymerase uses free nucleotides to build a complementary strand of DNA that, when combined with the other complementary strand of DNA, will form an identical molecule to the parent DNA.

Where is DNA polymerase?

How does DNA polymerase work?

Let’s start by thinking about a single strand of double-stranded DNA. This DNA is wound tightly and needs to be unwound to separate the two strands. There are two enzymes that take care of this job: topoisomerase and helicase. Topoisomerase is responsible for relieving the tension, called supercoiling, that is created from unwinding the tightly wound DNA. Helicase is responsible for breaking the hydrogen bonds that form between complementary base pairs. Once these hydrogen bonds are broken, the two strands are separated. Topoisomerase and helicase work together to create a replication bubble in the strand of DNA.

Remember that DNA is a double-stranded molecule with directionality so there are two separate polymerases working on every single strand. Each polymerase is making a complimentary copy of its assigned parent strand of DNA. These two copies are also complementary to each other and will be joined together to create the copy of the parent DNA. The 3’ to 5’ strand is much easier to duplicate because the polymerase does not need to stop and can just keep moving along the strand. The polymerase adds to the 3’ end of the newly forming strand and moves toward the 5’ end of the parent strand. This is called the leading strand and duplication is continuous on this strand.

Remember that DNA is a double-stranded molecule with directionality so there are two separate polymerases working on every single strand. Each polymerase is making a complimentary copy of its assigned parent strand of DNA. These two copies are also complementary to each other and will be joined together to create the copy of the parent DNA. The 3’ to 5’ strand is much easier to duplicate because the polymerase does not need to stop and can just keep moving along the strand. The polymerase adds to the 3’ end of the newly forming strand and moves toward the 5’ end of the parent strand. This is called the leading strand and duplication is continuous on this strand.

The other strand is called the lagging strand and replication is not as simple. Since this strand runs 5’ to 3’, and DNA polymerase reads 3’ to 5’, it will have to work backward in a sense. Since DNA polymerase can only move in one direction and add to the 3’ end of the complementary strand, it has to stop and start over again continuously and each time a new RNA primer needs to be laid down by primase.

These pieces of the complementary strand are called Okazaki fragments. You could think about it as the polymerase taking two steps forward and then one step back as it lays down the nucleotides. The polymerase has to let go of the strand each time it needs to start a new Okazaki fragment, and then rejoin the strand at the next RNA primer. These fragments are then bonded together with DNA ligase that seals the strand breaks.

All polymerases have an active site where DNA is held and replication can be carried out. You can think of it as a hand with the DNA laying in the palm and the fingers wrapped around it. There are actually regions called the palm, the thumb, and the fingers. The palm contains the catalytic site of the polymerase. This is where the new nucleotides are added as the strand grows. The fingers are responsible for holding the template strand in the proper spot so that the catalytic site can make contact with the DNA. The thumb is important for processivity, or the number of times that polymerase can add a nucleotide without releasing the DNA. It essentially helps the DNA to slide through the polymerase.

What if DNA polymerase makes a mistake?

DNA polymerase has it’s own proofreading activity. There is a 3’ exonuclease in DNA polymerase that can remove a 3’ base pair that has been mismatched. An exonuclease is an enzyme that is able to cut off a small portion of nucleotides that contains the mismatched base pair. This activity plays a crucial role in genetic stability. Just one mismatched base pair can cause a deadly mutation in a cell that could potentially affect an entire organism. If these mismatches were allowed to occur in a species, the mismatches would potentially have an evolutionary impact. DNA polymerase makes a mistake about one in every billion base pairs but then is able to catch this mistake and fix it. That would be like a person reading a thousand books and only finding one mistake, and being able to pick out that one mistake and correct it.

How can DNA polymerase be used in science?


Polymerase chain reaction (PCR) uses DNA polymerase to amplify a small sample of DNA for analysis. This can be useful for DNA testing in forensic cases when only a small drop of blood was found at a crime scene. It is also useful in DNA testing, like paternity testing. It can also be used to label DNA or to sequence DNA. PCR can amplify a fragment of DNA giving you many varying segments of complementary DNA, which can be sequenced to find the genome, or part of the genome, of the organism in question.

The process of DNA replication is made possible by the presence of an enzyme called DNA Polymerase. DNA replication gets started when DNA polymerase binds itself at a primer on one of the two strands of DNA. This single strand of DNA is then taken as the base or guide, often termed as a template, and DNA polymerase starts adding extra nucleotides as part of the replication process.

It is important to note that as of yet, genetic biologists do not know of any DNA polymerase that can start a new chain on its own. DNA polymerase always has to depend on an available 3’-OH group for adding the nucleotides.

As mentioned earlier in the article, DNA polymerase always looks for the presence of a primer where it can start adding nucleotides. This primer, which acts as a process starting cue, is composed of RNA and DNA bases and the sequence of these bases always has two RNA bases at the front. Enzymes called primase to synthesize these RNAs while it is the responsibility of the helicase enzyme to form a single-stranded structure of DNA from its double-stranded shape. It’s this new single-stranded form that is then used to follow the DNA replication process.

DNA polymerases have been classified as categories called families. These families are: 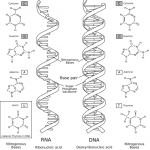 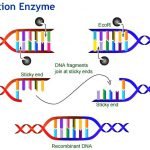