Mitosis and meiosis are the two forms of cell reproduction that occur in living organisms. They are the only two ways that new cells can be created. They work through the process of cell division – one cell splits into two (in mitosis) or four (in meiosis) identical cells, known as daughter cells. Mitosis and meiosis have two different purposes. The purpose of mitosis is to produce new cells for the body, and it is required for growth and repair of the body. The purpose of meiosis is to produce sex cells, which are known as gametes. These are sperm and egg cells, that are involved only in reproduction.

The end products of mitosis and meiosis are very different to each other. The end product of mitosis is two daughter cells, which are identical to the original cell that divided to produce them. They are also identical to all other cells in the body, barring any mutations in the cells’ DNA. The end product of meiosis, however, is two cells which each have half the number of chromosomes that a normal cell has (gametes), only having one copy of each chromosome. These are known as haploid cells, as opposed to diploid cells, which have two copies of each chromosome. This happens because, during fertilization, two gametes join together and the resulting cell has two copies of each chromosome and is diploid.

Mitosis and meiosis occur in different places to each other. Mitosis occurs in all living cells in every organism because it is how these cells reproduce. Every cell in the body is produced by mitosis and will undergo mitosis itself. Meiosis, however, does not occur in most cells. It occurs only in the testes and ovaries in animals, as it produces only gametes – sperm and egg cells. Meiosis is not necessary for any other cells, whereas mitosis is essential for all cells in the body.

Errors can occur in both mitosis and meiosis. Errors in mitosis include nondisjunction, where chromosomes don’t separate properly, and endoreplication, where the chromosomes are copied but the rest of mitosis does not occur and the cell doesn’t split. Nondisjunction can also occur in meiosis. However, these errors have very different consequences to each other.

Crossing over does occur, however, in meiosis. As part of both mitosis and meiosis, the chromosome pairs (the two copies of each chromosome) pair up. When this occurs in meiosis, the two chromosomes in each pair exchange genes with each other.

Different processes occur in each of these phases, all of which are essential to both mitosis and meiosis. In mitosis, these five phases occur once, and then mitosis is complete. However, meiosis is split into two rounds, called meiosis I and meiosis II. Meiosis I consists of interphase, prophase I, metaphase I, anaphase I, and telophase I. Meiosis II then follows, which consists of prophase II, metaphase II, anaphase II, and telophase II, with interphase not occurring in the second round. The phases are the same process whether they occur in mitosis or meiosis, it is just that meiosis requires them to occur twice. 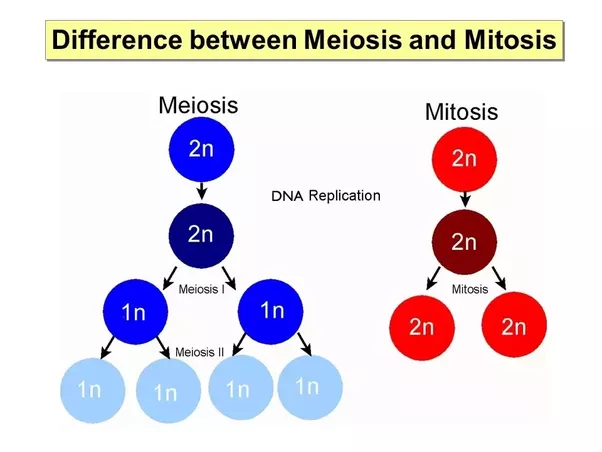 Mitosis and meiosis – the differences