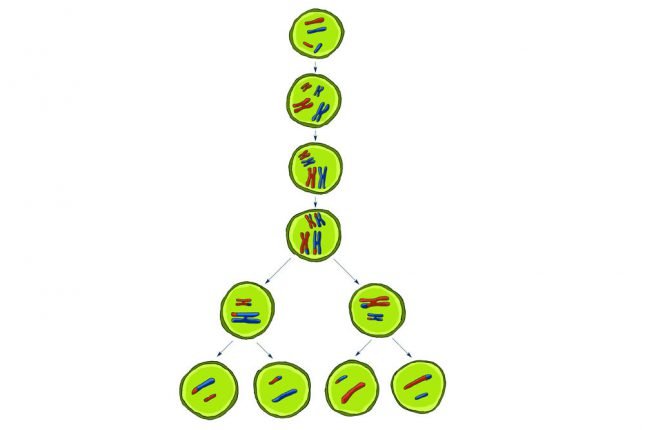 In female animals, only one cell develops into a sex cell, called a gamete, and the others are discarded. In male animals and other organisms, all four cells become gametes. It involves two rounds of division, in the first round the cells divide into two cells, and in the second round each of those divides into two cells. Mitosis consists of nine different phases, shared between the two rounds of division. The first round, called meiosis I, consists of five phases: interphase, prophase I, metaphase I, anaphase I, and telophase I. The second round, called meiosis II, consists of only four stages: prophase II, metaphase II, anaphase II, and telophase II.

During Meiosis I, the cell splits into two haploid cells, in a process that is slightly different to mitosis.

During anaphase I, the meiotic spindle fibres start to contract, and this action pulls one chromosome from each pair towards each centriole until paired chromosomes end up at opposite ends of the cell to each other.

During telophase I, a nucleus forms at each end of the cell, around each of the two sets of chromosomes. A nucleus is the part of the cell where most of the genes are contained and that regulates many of the processes that occurs in the cell. Then, decondensation occurs, which is where the chromosomes unravel and go back to their usual state like they were in before the onset of prophase. Finally, the cell becomes longer and pinch in the middle, before splitting apart into two identical cells, called daughter cells, in a process called cytokinesis.

In meiosis II, a very similar process occurs, but this time it results in the production of two cells that are identical to the cell that divides.

During prophase II, condensation occurs again, although this time there is half the number of chromosomes that there were before. The nucleus of each cell breaks down, releasing the chromosomes, and the one centriole is copied. The two centrioles then move to opposite sides of the cell.

During anaphase II, the two halves of each chromosome split apart and are now known as daughter chromosomes. Then the meiotic spindle fibres contract and one daughter chromosome from each pair is pulled towards each centriole until they are at opposite ends of the cell to each other.

During telophase II, a nucleus forms around each group of chromosomes, one at each end of the cell. After this has occurred, the chromosomes decondense once again. The cell then elongates and pinches in the middle, then splits into two cells, which are identical to each other.

In rare cases, the chromosomes don’t separate in a normal fashion, a condition known as nondisjunction. This is as opposed to disjunction, which is the name for normal chromosome separation.

When nondisjunction occurs, gametes are produced which have an incorrect number of chromosomes. They either have too many or not enough of a particular chromosome. In most cases, these gametes will not be able to undergo fertilisation and produce an embryo. However, in some cases, depending on the chromosomes affected, fertilisation can still occur. Offspring produced from these gametes will suffer from medical disorders caused by having the wrong number of chromosomes. There are many well-known examples of this that affect humans, such as down syndrome, which is caused by having three copies of chromosome 21. Nondisjunction can occur in either meiosis I or meiosis II. 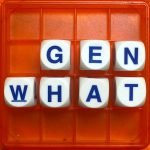 Previous Story:
How Long Is A Generation?

Next Story:
What is mitosis?